This post includes preliminary results and findings from a survey of the status of online access to administrative decisions in the US.  This survey was conducted over the course of September 2016 and is based on and replicates the methodology developed by Sarah Glassmeyer for the State Legal Information Census published in 2015.  The main objective of this initiative is to expand our understanding of the level of online access to legal information in the US to the field of administrative law.

Proponents of Free Access to Law in the US have been asking for better access to administrative law judges’ (ALJ) decisions for years.  For instance, in 2013 Tom Bruce from the Legal Information Institute (Cornell  LII) wrote a somewhat bold post stating “Dear Federal Agencies … put your goddamned ALJ Opinions Up”.  Although progress on this front has been limited in comparison with the opening of access to judicial opinions, many state governments are currently considering the opportuneness of improving online access to administrative decisions.  One such example is Arkansas, where the Act 896 of the 2015 Arkansas General Assembly introduced the obligation for the Arkansas Department of Finance and Administration to post its opinions on the government website after redacting confidential information.   However, apart from piecemeal knowledge of facts of this sort, until now there has been no central source of data on the overall status of access and best practices regarding the online publishing of ALJ opinions.

The census consisted in reviewing the free and open status of those appeal decisions by analysing the eight major barriers to access identified by Glassmeyer in 2015.  The following questions were asked for each website included in the census:  Is the information provided official?  Is it provided in an open container format? Are archives available? Are there any restrictions attached to reuse?  Does the state claim a copyright on the information? Does the state publish by itself? Are there disclaimers about the usefulness of the data provided?  Is full-text search provided?  Although some barriers are less relevant in the context of administrative decisions, the same scoring was kept in order to enable comparison between the censuses.

The main challenge that had to be addressed over the course of this process was the variable structure of decision-makers producing administrative decisions in the US.  About half of the American states (27) have put in place a central panel agency mandated to hear administrative appeals originating from various state agencies.  However, some central panels are responsible for all appeals across the state and others for only a few agencies.  In the remaining states (23), appeals are heard by ALJs operating from within their respective agencies.  For consistency reasons, it was decided to scrutinize the central panel website whenever available, and to fall back on three major state agency websites when not.  In the latter situation, agencies rendering appellate decisions in the following three sectors of activities were systematically identified and analyzed: worker’s compensation, motor vehicles, and taxation.

Unsurprisingly, the major finding of the census is that US administrative decisions are currently significantly less accessible than judicial opinions.  On average American states score 2.45 points on a scale of 0-8 for accessibility of ALJ opinions.  In comparison, they scored 4.8 on average for accessibility of case law in Glassmeyer‘s State Legal Information Census.  The overall average was dragged down by 16 States that are not providing any access at all to their ALJ opinions on the internet.  The best scores were achieved by Arizona and Texas with 7 out of 8.  Just as for case law, no state provides barrier-free access to administrative decisions. 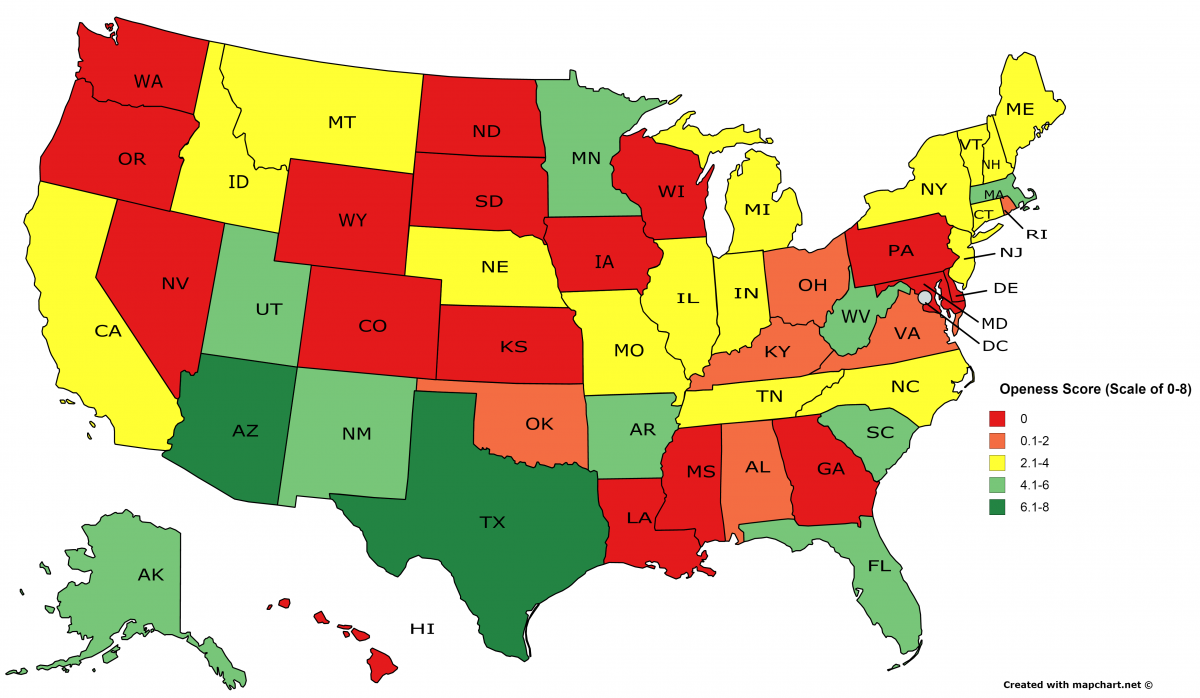 The census also highlights a few distinctions between access to administrative decisions and judicial opinions:

For those interested in learning more about the subject of access to administrative decisions, a formal report on this census is to be submitted for publication in an upcoming issue of the National Association of Administrative Law Judiciary (NAALJ) journal.  In the meantime the raw data of the census is available bellow:

This work is licensed under a Creative Commons Attribution 4.0 International License.  The information collected during this census is available for download and reuse via this website.